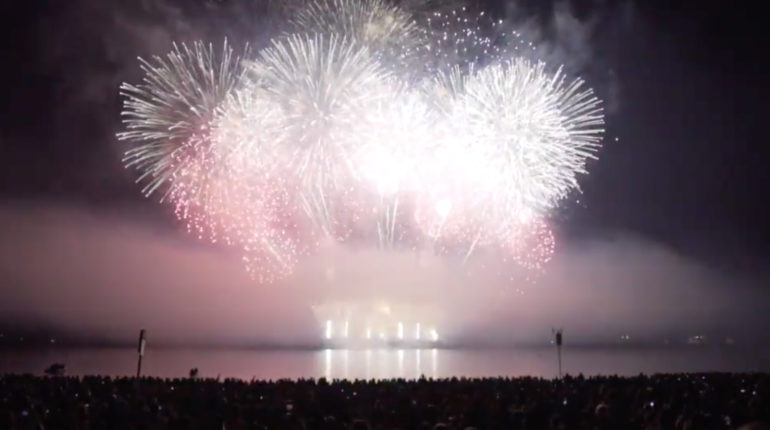 Team Canada's ending performance at the 2019 Honda Celebration of Light.

Team Canada, represented by Firemaster Productions Inc., has been named the winner of the 2019 Honda Celebration of Light.

Although Team Croatia, who was voted as the People’s Choice Winner through the official Honda Celebration of Light app, and Team India delivered spectacular performances, Team Canada had the edge in the eyes of the judges.

Team Canada really used the barge and supplied equipment to their full potential, they pushed limits by mounting their products in new and exciting ways to fill the scenes from varied angles and even spelled out “HELLO” in sparks.”, says Kelly Guille, President of Archangel Fireworks Inc. “They had a fun energy, and their tracks were uplifting. The competition was tough this year, it’s hard to believe that it was Team India’s first competition performance anywhere in the world, and team Croatia pulled big nostalgia and emotion from the crowd using popular movie soundtracks to back their massive spectacle.”

Those who missed all of the amazing performances can watch the videos on the Honda Celebration of Light’s Facebook page by clicking on the links below!

Team Croatia, represented by Mirnovec Fireworks, won the crowd with their performance on August 3rd:
https://www.facebook.com/CelebrationOfLight/videos/2075500759418436/

According to the event organizers, over 1 million festival-goers packed the beaches of English Bay, Second Beach and Vanier Park over the three nights, and thousands enjoyed the line-up of musical talent at The Park Stage at Second Beach, Z Fest, and the Pete McLeod Air Show.

About the Honda Celebration of Light

The Honda Celebration of Light is BC’s largest public event and the longest-running offshore fireworks competition in the world. It attracts up to 400,000 spectators along the shores of English Bay each night. Owned by the volunteer, not-for-profit Vancouver Fireworks Festival Society, 2019 represented the 29th consecutive year of the event, which contributes over $174 million in incremental tourism and hospitality spending each year. The Honda Celebration of Light event is produced by Vancouver-based BRANDLIVE Management Group, in collaboration with Archangel Fireworks Inc.

Follow the Honda Celebration of Light on Social Media