As fall approaches, one of B.C.’s more unique seasons is ramping up: grizzly watching season. Tipping the scales between 130 and 360 kilograms, grizzlies are one of the largest animals in British Columbia and the largest predator on the coast. These majestic animals are typically solitary creatures, hunting alone over their vast range. However, as temperatures dip the bears gather near rivers and streams to feast on the spawning salmon that are abundant for a few short weeks. 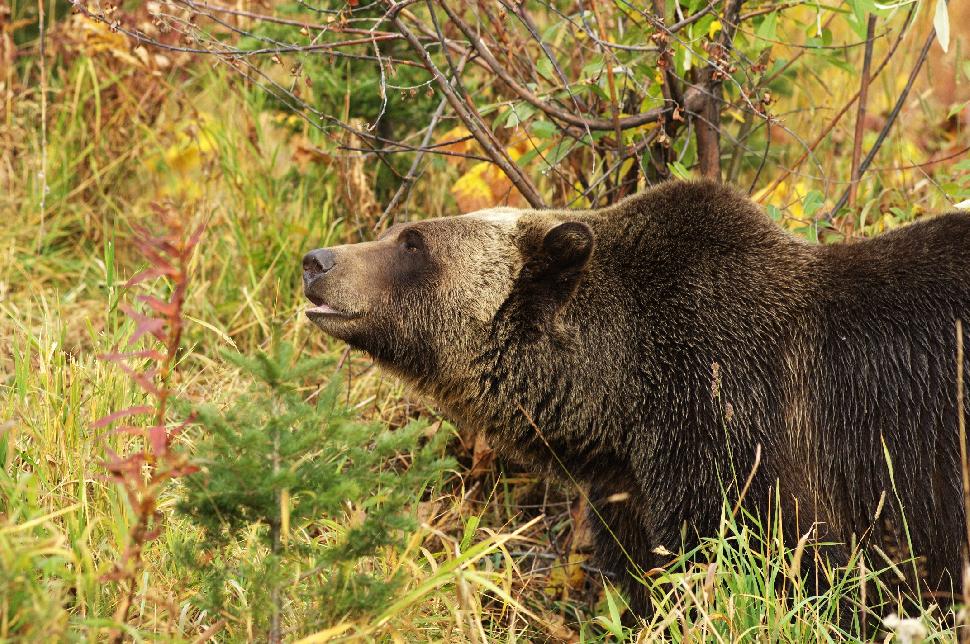 Once found all over North America, grizzlies are now most frequently seen in Alaska and Western Canada. A population of about 25,000 roam across British Columbia, Alberta, the Yukon and other northern regions. Our coastal grizzlies have the dietary advantage of consuming spawning salmon, helping them bulk up for the long winter hibernation.

Bear watching “season” typically begins around the end of August and wraps up when the salmon run is over. (Usually four to six weeks later.) Few places guarantee a bear sighting and timing can greatly improve your chances. Travellers visiting the rivers late in the season will have fewer grizzly-sighting opportunities, but they’ll enjoy quieter stays and a greater chance of glimpsing other wildlife.

There are many spots in Tweedsmuir Provincial Park which provide excellent viewing opportunities, all the while keeping humans and grizzlies a safe distance apart. Fisheries Pool is a popular vantage point for gawkers who plan to stay a few days and make use of the small campsite. Day-trippers may prefer to head to Belarko Spawning channels and watch the bears from spots overlooking the river. Tweedsmuir is a destination for both amateur and professional photographers to capture one of Canada’s most magnificent animals amid a stunning natural setting.

Maintaining a safe distance is paramount and visitors seeking extended viewing opportunities may choose to take advantage of the numerous tours offered by trained guides. Spend three or four days on drift boats along the Aharko River. Or, take a trek through ancient forests to the petroglyph gardens. Shorter alternatives exist along the Bella Coola River and guided floats enhance the experience with education about the region, as well as the grizzlies. This is an excellent site for admiring fjords and glaciers, as well as allowing visitors close-up views of the salmon spawning.

A different type of viewing can be had on the Orford River where a high-speed vessel is more appropriate (trips depart Campbell River). When combined with viewing platforms, visitors are assured of seeing the bears from both the river and land perspectives. Keep your camera handy, these trips offer up multiple photo ops. Enjoy the surrounding rainforest and visit one of the few pristine watersheds in northern B.C. Keep an eye out for timid wildlife as you wander through old-growth forest dripping with moss and pass by gorgeous waterfalls and streams.

Glendale Cove in Knight Inlet provides yet another type of viewing adventure. Come fall, this area hosts one of the largest concentrations of grizzlies. In fact, bears can often be seen without even leaving the lodge. (Imagine that!) Vacation packages run from two to six nights, giving visitors the flexibility to work around many different schedules.

Near the Selkirk Mountains safari-goers can enjoy perhaps one of the most unique ways to see grizzlies. Operated by bear experts, tours are mainly on foot, following paths that pass popular grizzly fishing sites. Some tours are conducted on water but all emphasize a natural experience on-level with the bears. Groups are small and limited to adults in reasonable shape. Note: this is not a do-it-yourself itinerary.

Lions, tigers and bears – oh my!

Have you ever seen a grizzly?
Let us know – comment below!