Exploring the many incarnations of Alexandra Bridge 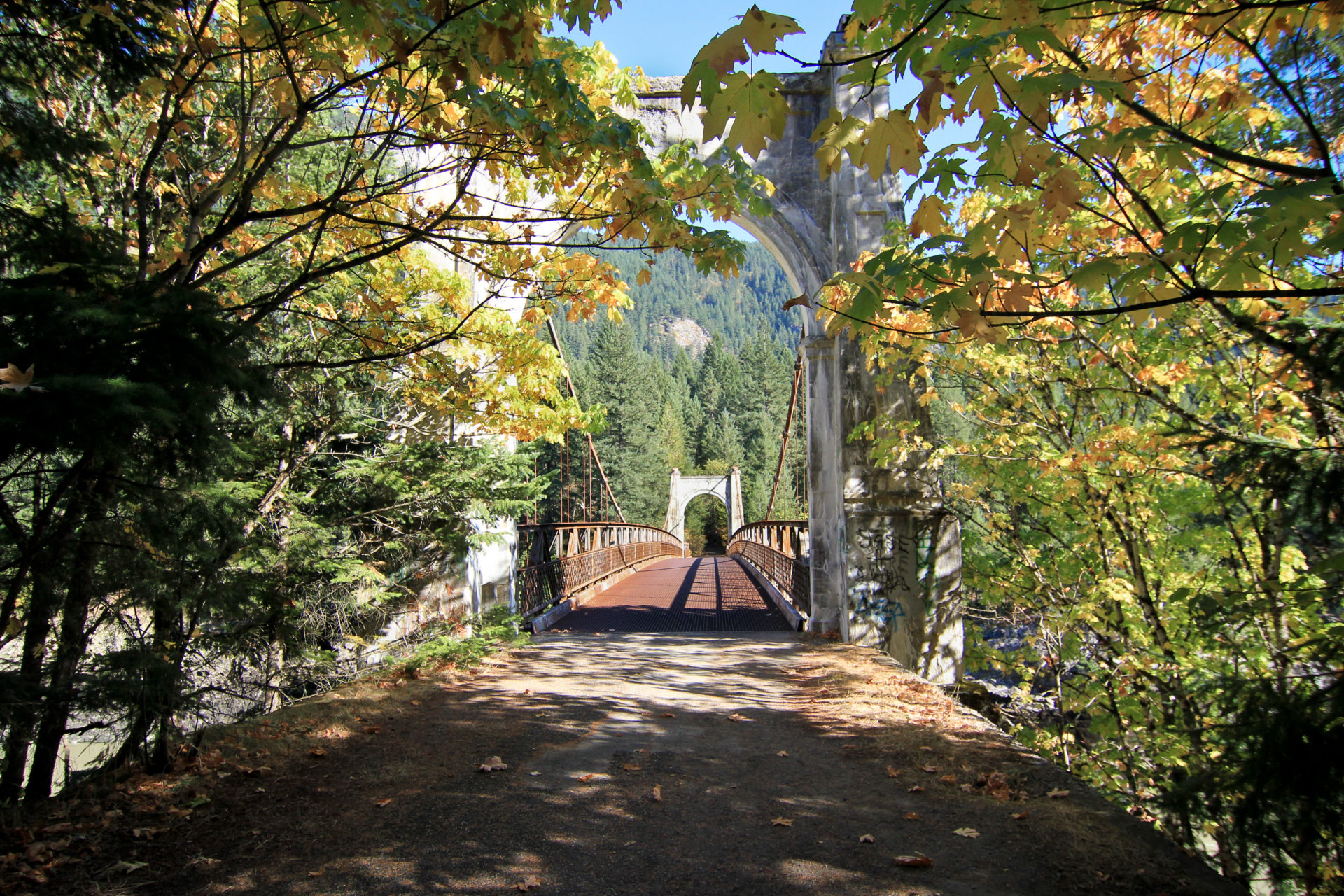 Where is Alexandra Bridge? Most will tell you that it’s part of Highway 1 through the Fraser Canyon corridor, just north of Hope. The highway follows the original Cariboo Road, a project initiated in 1860 by James Douglas, Governor of the Colony of British Columbia.

This section of the road was a surveyed and constructed wagon road from Fort Yale, now Yale, to the well-known Gold Rush town of Barkerville. Originally built to accommodate miners and settlers in search of striking it rich in the Cariboo gold fields, it’s a stretch of road through formidable and hazardous canyon terrain.

Travelling the canyon today is a great experience. It’s a beautiful drive and each time I travel it, I love to explore little towns and communities along the way—including some well-hidden remnants of ghost towns such as Emory Creek. Every time I pass by a piece of forgotten history—a section of presently unused highway, a stretch of the original Cariboo wagon road, an old section of rock retaining wall, the original Hell’s Gate tunnel, an abandoned restaurant or gas station—I contemplate what it would have been like 50 or 100 years ago… and often pull over to explore. It doesn’t surprise me that a trip through the canyon takes me longer than it should. 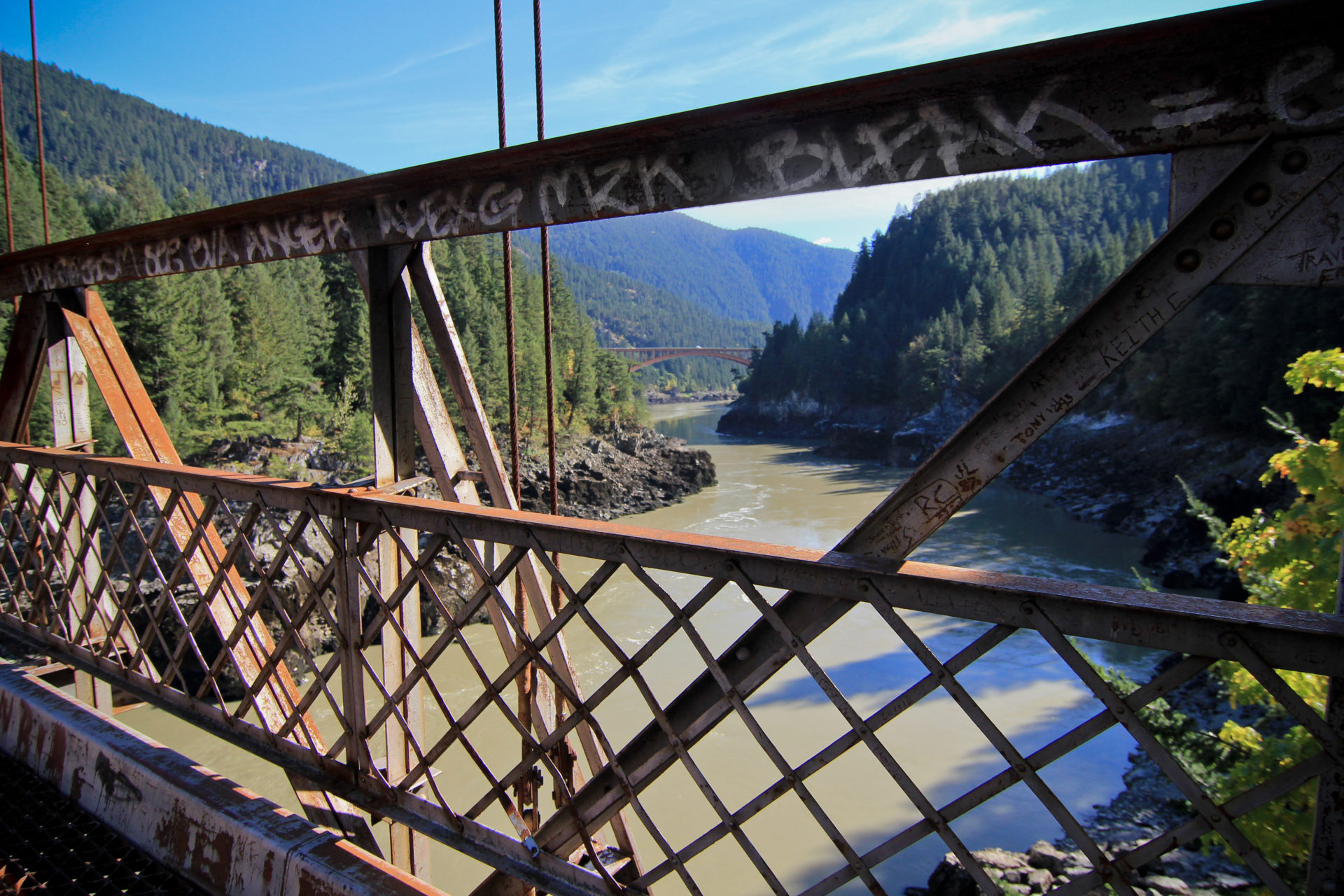 One of the sections of the original and now-unused Cariboo Road is an old stretch of highway that leads down and across the original Alexandra Bridge. As I mentioned, many know where the present bridge is, but below the current highway grade near the namesake Alexandra Bridge Provincial Park, the original road meanders along until it reaches the old bridge. As you drive across the modern bridge, you can look north up the river and see the original. I can recall the mystery I felt when, as a child, I glanced through my parent’s car window down at the magnificent structure. It looked so lonely and forgotten in the canyon, and even to this day that feeling persists.

Hiking down the original section of the road is alluring. The pavement is cracked, worn and non-existent in spots, pressed in on both sides by full-grown trees and overgrowth. It’s difficult to believe it was once used by vehicles. 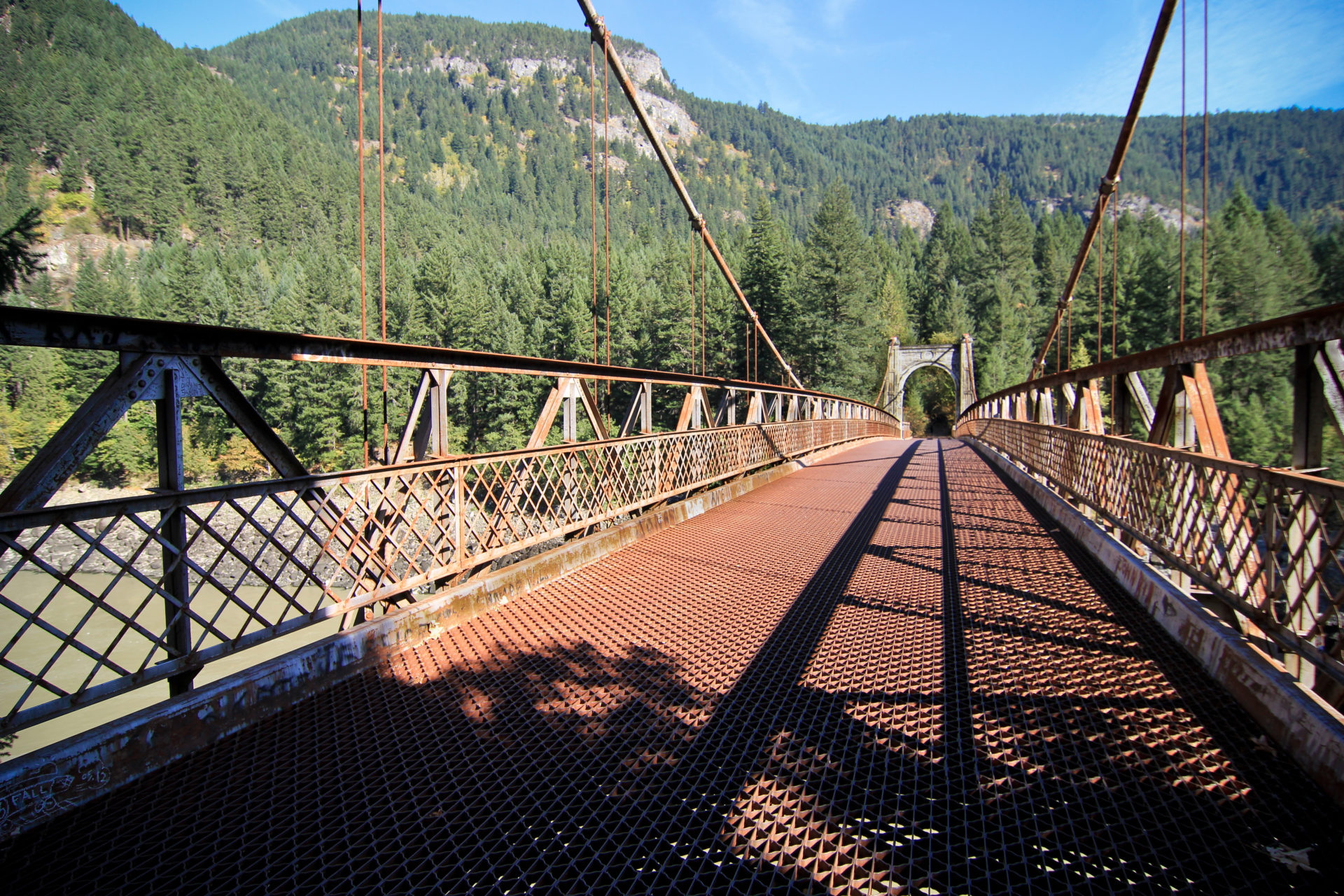 The bridge deck is an open-weave metal mesh, with two large cement towers complete with rusty suspension cables. Walking across the old bridge is always a touch unnerving, as you can see the flow of the mighty Fraser directly beneath your feet. That, and the fact you know the bridge is not maintained or monitored and no safety precautions are in place like you’d find at the usual touristy stops.

As described by Michael Kluckner, a Vancouver-based artist and writer, this old bridge is actually the second Alexandra Bridge, and hasn’t been used by vehicles since 1964. Essential to the completion of the Cariboo wagon road, the first Alexandra Bridge existed on that same spot. It was in use from 1863 until it was mostly washed away in the great Fraser flood of 1894. The remnants of the first bridge existed until 1912, when a road supervisor cut the suspension cables in fear for the public’s safety. In 1926, the second Alexandra Bridge was built directly on top of the original bridge abutments. If you can take your eyes off the dizzying rapids below while standing on the bridge, you can see the original abutments. When the bridge opened, it had a $1 toll, which was a considerable amount for the 1920s. The toll booth and resident collector was established in Spuzzum.

I’ve visited the old Alexandra Bridge on several occasions, however, I believe that one particular nighttime visit was the most impactful. My wife and I were travelling from Vancouver Island to the interior with some friends. It was late when we left the Island and we didn’t get to Hope until after 11:00 p.m. Even though it was the middle of the night and we had just begun the windy canyon drive, I stubbornly insisted we stop and show our friends the old bridge. They were from Ontario, and hadn’t yet witnessed even a fraction of BC’s splendour or mystery.

It was dark, but we had flashlights and a full moon to lead us down the section of old highway. As we walked carefully across the cracked pavement a thick fog rolled in, covering the moon and making it difficult to see. A few minutes later, we rounded the final bend and approached the bridge. The impressive cement and metal structure loomed across the river, wisps of fog moving across the wire bridge deck and caressing the top of its pillars. We walked out onto the wire deck, unable to see the water rushing below—but we could sure hear it. While standing about one-third of the way on the bridge, everyone was quiet and then the fog suddenly rolled away from the moon and lit everything up. At the same time two trains went by, one on each side of the canyon, their horns calling out a warning synchronously in the dark. 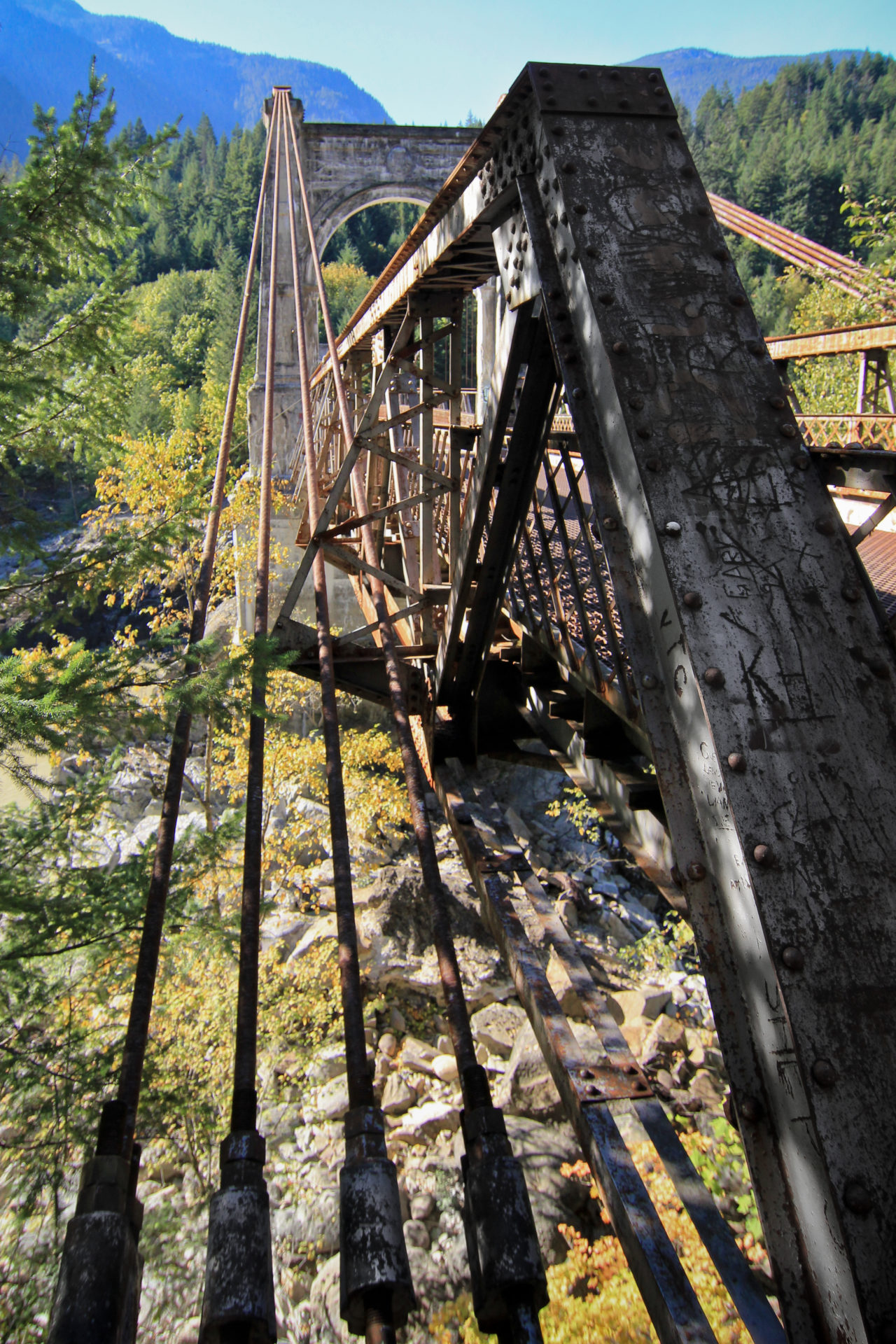 Last fall, while travelling up Highway 1, I spontaneously decided another visit was necessary. I’d always wanted to explore further up the road on the other side of the bridge. My friend, Michael Fast, and I took a break from our drive, parked at the Alexandra Bridge Provincial Park day-use area and trekked down the old highway, across the bridge and into the woods. I had received a tip from Jemma Driscoll, via the Forgotten British Columbia page, that there was at least one cabin and a couple vehicle wrecks further up the mountain and I wanted to find them. Jemma had said that the cabin now lost in the woods belonged to her in-laws. It was built in the early 1970s by Jemma’s fiancé, Bobby Blyth’s, father and uncle. Bobby’s parents, Don and Linda Blyth, raised Bobby’s four older siblings there. They left for Hope in 1984.

As we hiked along the old road further up the hillside, the overgrowth was plentiful. Numerous wildlife trails and other paths bisected the road, making it difficult to keep track of where it actually was. On the left bank I noticed an old red truck, tipped over on its side and leaning against the trees. I’d later find out that it was Old Stinky, named by Bobby’s dad. A while later, the ground levelled out and the trees got taller and closer together. Even though it was a clear day, they blocked most of the sunlight. An old rusty pail brought my attention to the left, and only then did I notice the Blyth cabin, mostly collapsed and hidden in the trees. It was a typical A-frame design cabin, much smaller than I’d expected for raising four children! We also discovered another rusting old truck; I’ve since been told it’s a ’54 Chevrolet. Its left fender was crunched in what was apparently an accident. Left there for nature to reclaim, it reminded us once again we were actually hiking an old highway. 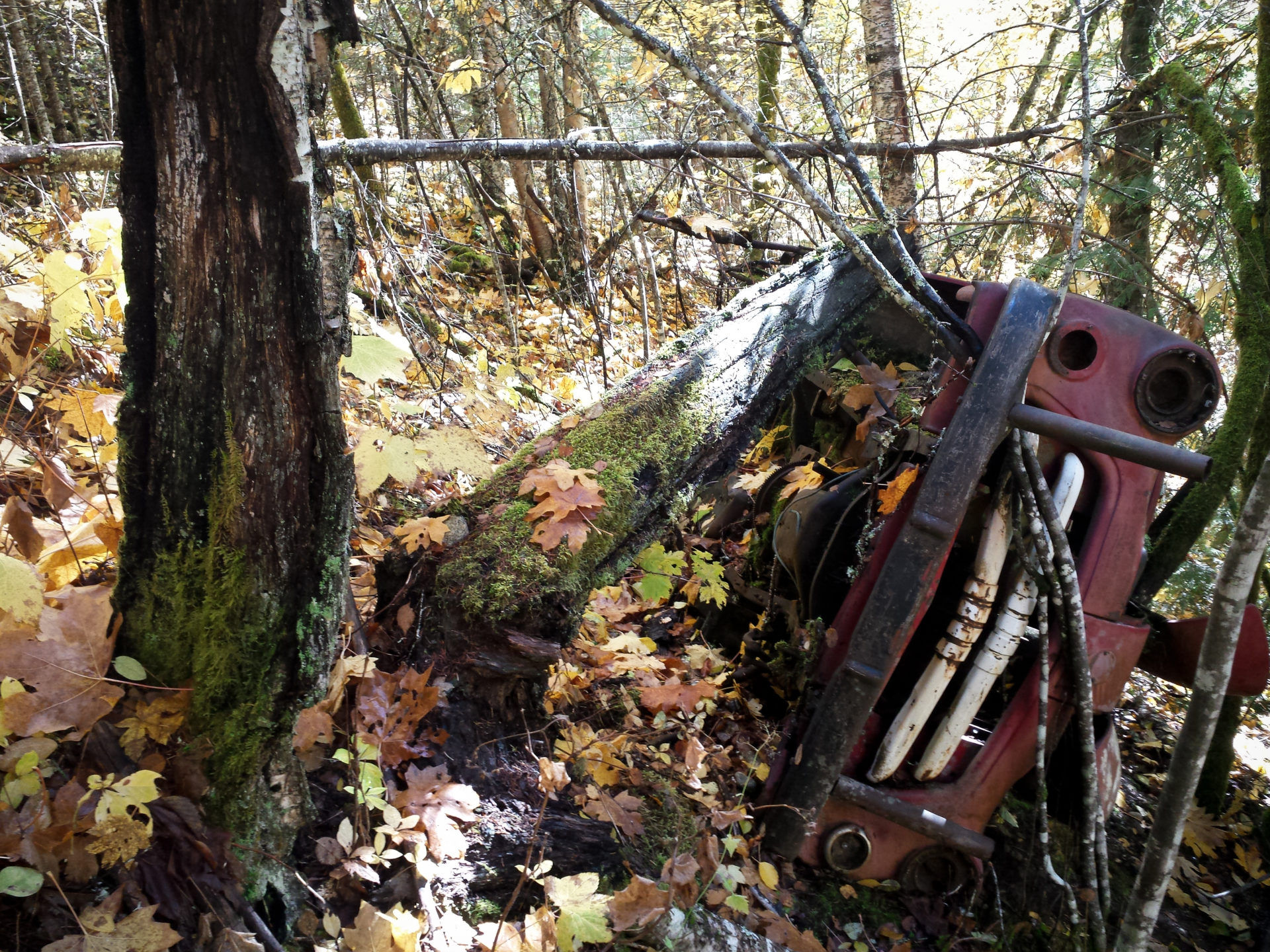 Feeling successful and getting that taste of abandoned discovery in my mouth, I persuaded Mike to continue further into the woods. We hiked further along what I believe was still the Cariboo road, hoping it would eventually pop out onto the existing highway just south of the modern bridge. This would make for an easier hike back to the car. A while later, after crossing several small creeks and hopping fallen trees, I began to realize we should head back—and then noticed I had lost track of exactly where we had come from! Being somewhat experienced with exploring the woods, I found it embarrassing to admit we were “slightly misplaced,” and even more embarrassed when I realized the tree cover was so encompassing that my cellphone couldn’t receive GPS signal. (Normally I would have a proper GPS in my possession when exploring, but I guess that’s a risk of spontaneous hike!) I wasn’t too concerned though, as we had brought food, water, my satellite tracking beacon and we weren’t that far away from the highway. All we really had to do if completely lost was hike downhill until we encountered the railway and follow it south until it met with Highway 1.

Continuing onward, we stumbled into a picturesque meadow with an old cabin. The tall deciduous trees hanging low over it, their autumn leaves painted bright yellow in the afternoon sun, made it the perfect depiction of a cabin in the woods. There was a small, quiet stream running out in front of the cabin that echoed the yellow leaves. It positively glowed. Delightful! After a snack break and some careful thought, we figured our path out and made our way back down the hill; the Blyth cabin and Old Stinky confirming we had the correct route.

Find more of Andrew’s adventures at Forgotten BC