Stuck in the Gang Ranch Muck 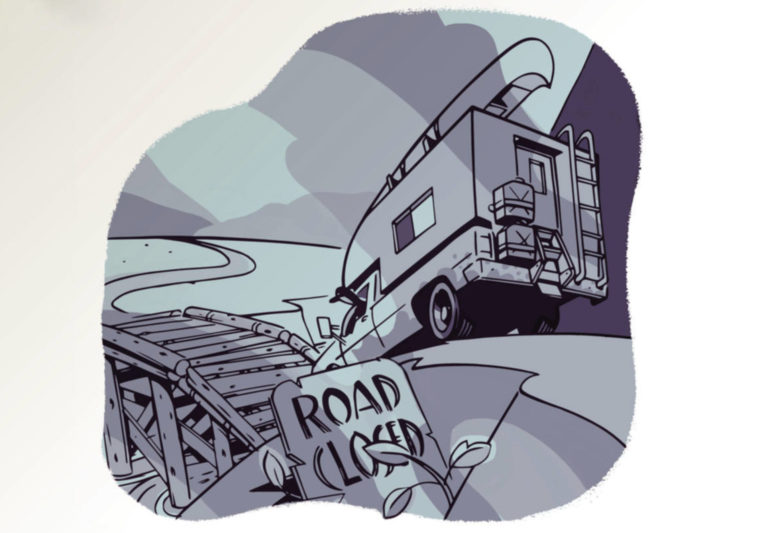 It helps to know where you’re going on the backroads. There’s extreme danger in following a Google map in the rugged backcountry of British Columbia without knowing the risk of road closures when the weather suddenly turns. Bridge washouts, avalanches, wind fall, mudslides and debris-torrents in swollen creeks bring on rapidly changing conditions that can make RV travel hazardous.

All through September unseasonal rain pounded the Cariboo, which is normally arid with less than 25 centimetres of precipitation annually. The area was deluged for days causing swollen creeks and flooding in the backcountry.

Such was the occasion while exploring the back end of the Gang Ranch in the central Cariboo region in my powerful 4×4 diesel truck loaded with the weight of a 10-foot camper.

After crossing the bridge spanning the Chilcotin River with spectacular hoodoos and sand dunes in Farwell Canyon, the mixed-gravel grade on the forest service road turned into slick muck as soon as we headed south on the haul road to Gaspard Cow Camp. Google offered a shortcut. After some debate, and with no road markers, we took the cut-off showing the way as best we could find to 2214 Road. It was a big mistake.

It wasn’t far before the windfalls blocking the road had to be yarded clear or skirted in the ditch. It was apparent that this was a road rarely travelled. Snow flurries and mist added to the mystic surroundings in the mixed interior second-growth douglas-fir forest. Further along, as darkness settled upon the range, we decided to remain for the night on a wide-open plateau. We hunkered down with a prime steak and a bottle of red and sheltered from the wind buffeting the camper.

The next morning, we set off on a series of switchbacks down the steep grade toward Gaspard Creek. The deep treads of the tires were losing any sense of traction as we spotted a bridge, slathered in a slurry of muck from the heavy rain carried down from the day hills. With some amazing luck we stopped just inches short of the bridge deck. It was the slight drop onto the bridge that caused us to pause. A metre farther and we would be stuck, likely until next spring.

There was no way ahead, and backing up the switchbacks was not an option. We were within five kilometres of the Gang Ranch headquarters with a washed-out bridge between us.

We set off on foot sloshing through the muck, only to find that the cowboys were in town for the weekend, with only a young lady from Quebec attending the cookhouse and general store. The ranchers would be back when the weather forced the cattle down from alpine grazing. Even with a huge John Deere tractor nearby, there was no chance of getting a tow over the abandoned bridge.

Heading back to the truck with just a shovel, it was then we saw the warning signs blocking access to the bridge from the south. The road-closure signs from the north had apparently been thrown in the ditch.

Even if the condemned bridge held the 14,000-pound truck/camper, the real danger was the truck could fishtail and topple over the limited guard rail into the debris torrent below. There would be no escape from the raging currents at the bottom of the 10-metre canyon.

Having decided to retreat back the way we came, we were still scared the truck would slip sideways in the muck while finding a place to turn around. Once we cleared the mud-caked tire treads with the shovel, we backed the rear on a small grassy patch. She held. Then with the full force of the turbo diesel and the back end fishtailing, we powered back up the switchbacks to the plateau.

It wasn’t how we planned to spend our day, but we were in one piece, and we still own a shovel to attest to our adventure.