Travel north, way north, and be rewarded with one of the world’s most spectacular natural sights

Standing in the middle of the highway, I’m watching the northern sky, hoping for the green glow of the aurora borealis. Above me are drifting clouds and a few patches of bright stars. But on the northern horizon, there’s only darkness; the biting wind doesn’t seem to be blowing away the important clouds.

As I stand on the frozen road, hoping for that telltale glimmer, I start telling what I’ve always thought of as an embarrassing story: Years ago, my husband Evan and I were camping in Quebec when the northern lights began dancing overhead. As we watched, I asked why they weren’t making sound. Growing up on Vancouver Island, whenever the northern lights came out it seemed like the wolves howled. When Evan asked me what sound I talking about, I realized I’d conflated the two. In my mind, the northern lights shimmered in time to their own mournful song.

In truth, they’re silent (unless they actually do make that crackling sound some people swear to). And as the cold seeps through my layers and the stars faded under the cloud cover—I realize on this night they’d stay invisible as well.

Northern lights chasing has always struck me as a fickle pursuit. Actually any activity, from whale watching to bear viewing, that requires nature to perform on a schedule, strikes me as a really good reminder that nature is going to do its own thing. Happily the stretch of the Alaska Highway I was standing on had a lot more to offer than cold feet and a cloudy sky. To embrace a cliché, it turned out this trip was all about the journey.

British Columbia’s northeast, during winter, is astonishing. It starts off as flat land and scrubby forest, but as you travel west the land crumples and folds into the northern Rocky Mountains. Here, frozen waterfalls hang suspended in the air above iced-over rivers that wind silent and still between tall snowy mountains sporting wind-scrubbed peaks of barren rock. It’s a harsh region. I’d thought it of as inaccessible to visitors during the coldest months. The sort of place where you might hunker down with a big pile of wood in October and then dig your way out come April. It didn’t feel like it could possibly be a midwinter destination.

Then I learned Fort Nelson hosts a Northern Lights Festival in March, which in non-Covid years attracts people from all over the world, and my curiosity was piqued.

If you look at a map of BC, you’ll find Fort Nelson up in the far corner from Vancouver—seemingly almost within a snowball’s toss of Alberta and Yukon. To get there, you can follow the Alaska Highway from its beginning in Dawson Creek—or do it the easy way and fly in. Once you arrive, the first thing that might surprise you (it surprised me) is that everything isn’t under three metres of snow. In fact the dry climate means that most of the winter is sunny and the annual snowfall is only 38 centimetres (15 inches).

Still, for a Vancouverite, the kind of winter found along the Alaska Highway is the kind of Canadian experience I’d only heard stories of. From dogsledding to outdoor hockey on a frozen lake; to wolf and moose sightings; to colourful characters with a lifetime of remarkable stories—this was my first real encounter with the kind of winter I’ve always romanticized.

One of the things I love most about visiting BC’s small towns, are the people you meet. If you’re not a dogsledding aficionado, you may have missed the fact that the world’s best dogsledders, of Streepers Kennels, are a family who live in Fort Nelson. Between them, they hold dozens of records and recently they opened up their kennels to visitors for dogsledding tours and stories.

I set off racing across the open landscape, behind a group of exuberant dogs, it was easy to see why the sport has captivated the family. There is nothing in the world quite like the pull from a well-trained team, the sting of the wind on your cheeks and the sensation of being launched into a snow drift—should you take a corner too tightly.

From Streepers, we headed to the Fort Nelson Heritage Museum where we met Marl Brown, a former army mechanic who almost singlehandedly assembled the museum’s remarkable collection of old cars and other Alaska Highway castoffs. If I wasn’t already intrigued by the region, an hour with octogenarian Brown left me smitten.

Setting off down the Alaska Highway, which Brown once drove in a 1908 Buick Model 10, we spot our first moose just a short distance out of town. Later—after the mountains had grown—we stopped and stretched our legs with a short hike up a frozen river. Faced with a tricky return walk I discovered sliding back down seated was the way to go—and it was way more fun than navigating a city sidewalk after a big freeze.

We arrived at our destination, Northern Rockies Lodge. Both nights of our stay we hoped for aurora viewing, but instead as the days filled with the wonders of winter and the sky stayed stubbornly filled with clouds it didn’t feel like anything was missing.

One of the days, after taking a day trip to Liard River Hot Springs, we caught sight of a timberwolf watching us from the snow bank on the edge of a highway. Pulling over I got just enough time to see him disappear back into the woods.

As he faded from sight I was reminded again of the wonder I felt when I thought the northern lights howled like wolves and realized my mistaken memory was far less embarrassing than I thought. How lucky we are to have this place that freezes so magically, where wolves and moose still roam, where people can lives such extraordinary lives and where sometimes, when you are lucky, dancing lights fill the sky.

Aurora Viewing in BC

You don’t need to travel to faraway places to see the northern lights. I’ve been lucky enough to see them while growing up on northern Vancouver Island, when camping in the interior and once, faintly, over Vancouver’s North Shore mountains.

Auroras occur when charged particles collide with gases in the Earth’s upper atmosphere resulting in flares that rise and fall according to multi-year cycles. The farther north you go, the better your chances of seeing it, but even during low solar activity years, the northern lights are visible in many parts of BC.

Look for a clear area with a wide view of the northern sky. Avoid light pollution and the full moon. 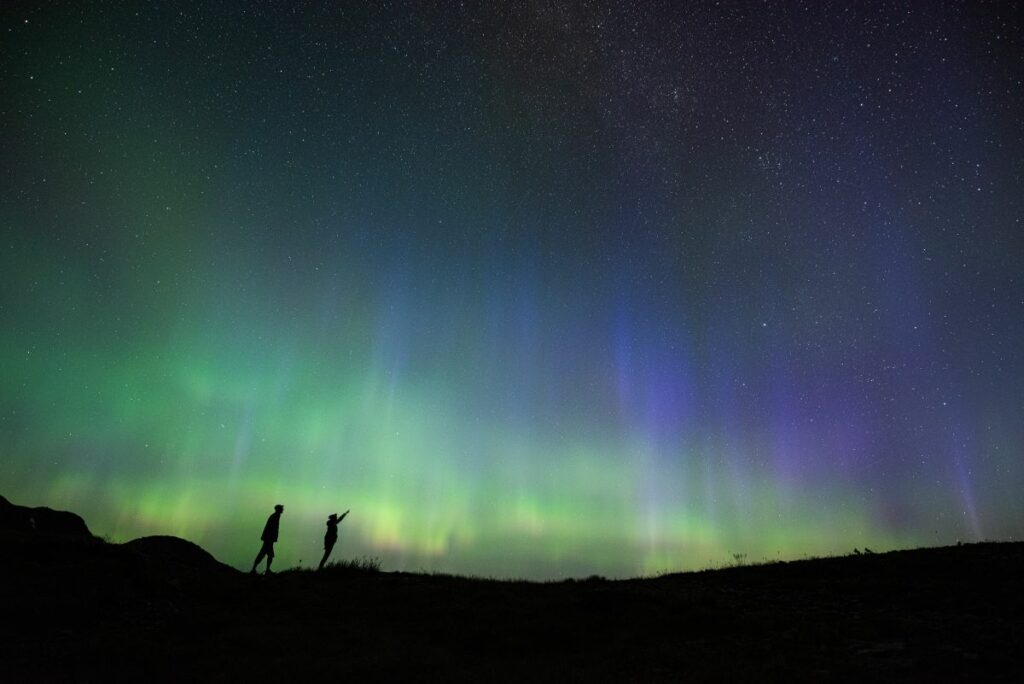