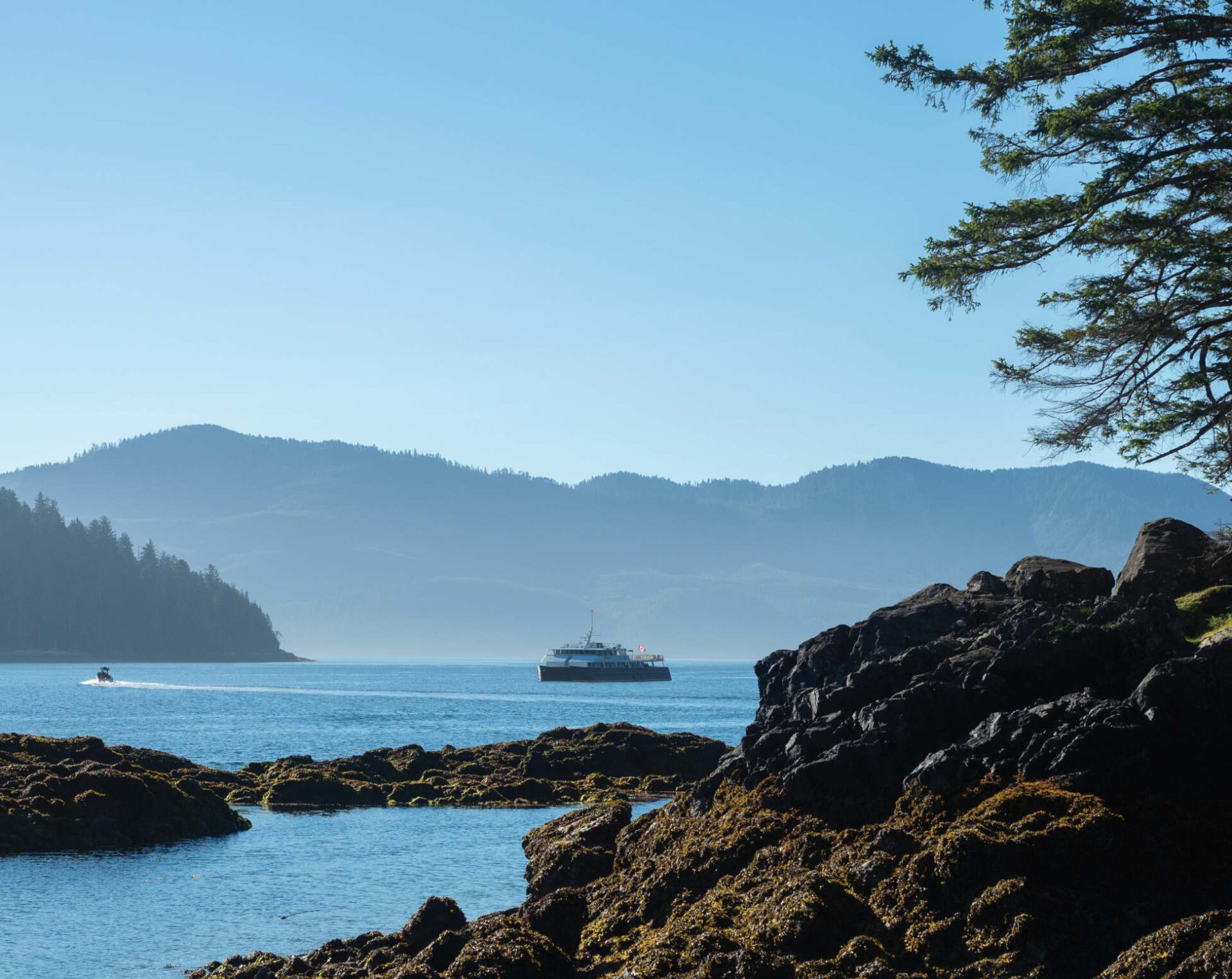 A cultural and natural exploration of Haida Gwaii by boat

Anchored just offshore Kunga Island, Cascadia, Victoria-based Maple Leaf Adventures’s micro-expedition ship, bobs serenely as we land our passenger dinghy on the sloping pebble beach. As we unload, I catch sight of a small Sitka black-tailed deer nibbling on a bush. The deer seems unbothered as expedition leader Greg Shea leads us up and over a high tideline scattered with kelp and small logs and into a forest that towers with an overhead canopy of redcedar, western hemlock and Sitka spruce.

Walking through the bush, our footfalls are silenced by a thick green moss that carpets everything on the forest floor. An absence of underbrush gives the woods an open and mysterious feel—a sense that turns strange and foreboding as we venture deeper. Suddenly I hear birdsong—and realize that’s what’s been missing. Then Shea points out what he’s brought us to see: a small fenced-off area, erected in 1998, to study what happens when plants can grow unhindered by grazing deer.

The deer-exclosure, one of about 20 set up to learn what kind of effect the invasive Sitka black-tailed deer have had on the remote island ecosystem, is lush and bursting with bird life. Verdant with ferns, salmonberry and huckleberry bushes, shrubs and small saplings, the small exclosure offers a leafy glimpse into how the landscape was altered when a handful of ungulates were introduced to Graham Island in the late 1800s.

Back aboard Cascadia, it’s cocktail hour on day two of our seven-day voyage through the islands of Haida Gwaii. Standing on the back deck, looking out over the rugged islands with a drink in hand, my husband Evan and I are chatting with John Gladstone, the trip’s Haida cultural guide. We tell him how it’s been over 25 years since we were last in these islands—back at the start of an eight-year sailing adventure aboard our 28-foot sailboat. Like for many of the other 20 passengers on 138-foot Cascadia, this trip is a special celebration—after two years of grueling treatment (in the middle of a pandemic), Evan has been declared cancer free. We chose the warm comfort of revisiting good memories of Haida Gwaii as our way of marking the milestone.

As Evan points out a spot close to the beach where we once anchored our sailboat, I comment on how good it feels to visit such a pristine and unchanging place. But then a deer appears. A descendent of those first herds which browsed their way across northern-most Graham Island and then island-hopped south along the length of the archipelago, denuding the undergrowth as they went—spurred on by the lack of natural predators, the small human population and the tender foliage left in the wake of clear-cut logging.

The next morning, I study the nautical charts and thumb through the books about Haida Gwaii found in Cascadia’s small library. The engines thrum as we weave our way past forested islands and a rocky islet currently doubling as sea lion nursery. We’ve made our way into Gwaii Haanas National Park Reserve and Haida Heritage Site, the first national park to be co-managed by park and First Nations representatives. Like many park visitors, I’m excited about what comes next; the opportunity to visit some of the ancient, abandoned villages—mysterious places that are often described as frozen in time.

Approaching SG̱ang Gwaay in a light drizzle, the mist lifts just as the standing mortuary poles come into sight. When we visited back in 1995, we were told the poles would soon decay and return to the earth—allowing the souls of the ancestors they contain to continue their journeys. But as we’re led through the village by a young watchman, I learn the poles are still standing thanks to the invasive deer which keep the site cleanly grazed and park-like, delaying rot.

Aboard Cascadia, our days are full—we kayak around bays, spot wildlife, explore beaches and, thanks to two talented chefs, eat far too well. But there’s also lots of time for contemplation. And after an excursion to see tufted and horned puﬃns (whose nesting sites are protected with invasive-rat eradication programs), I flip through a few more books, trying to make sense of a place that feels like a contradiction: unchanged yet constantly transforming, pristine yet waging an unending battle against invasive species.

Gladstone tells me the way to begin to understand Haida Gwaii is to try to grasp how deeply the land and people are interconnected: Gina ’waadluxan gud ad kwaagid—everything depends on everything else.

Oral history tells us the Haida have been living on this remote archipelago for at least 14,000 years. Arriving as Ice Age glaciers retreated—when the climate was in rapid flux—the ancestors lived in a very different landscape. One where the sea level was 150-metres lower. As the waters rose, oral history tells of the People surviving a great flood—and being cut off from the mainland. So, the Haida adapted, and learned to thrive by living in harmony with the land, building terraced clam gardens, tending the forest, becoming canoe builders and great seafarers.

The Haida were forced to adapt again when Europeans came for the sea otter furs. Hunted until the populations collapsed, the trade in furs not only resulted in an explosion in urchins which caused the loss of kelp forests, on which the entire ecosystem hinged, it brought illnesses including smallpox and tuberculosis. Disease had a devastating effect, reducing the pre-contact population of 20,000 to 30,000 Haida to fewer than 600.

The surviving Haida people were forced to leave their southern villages for Old Massett and Skidegate Mission, where their culture was outlawed, and the children were sent to residential schools. Then logging came. The decline of Haida culture and the depletion of Haida territory reached a boiling point at the Lyell Island standoff in 1985, when a group of Haida elders, clad in ceremonial button blankets, were arrested for standing up for the rights of their land and culture.

It’s a lot to take in. And not long after a discussion about the Lyell Island standoff I walk with Shea, who’s taking us up a creekside trail to see one of his favourite trees. I ask him if tourists really want so much complexity while on a vacation. He turns the question back to me; do I really want to travel to a place I don’t feel connected to?

Shea explains that the goal of Maple Leaf Adventures is to do more than give guests the chance to check a place off their bucket list or amass a few selfies. He says when they run trips to see wildlife, landscapes and culture on the coast, “we’re inviting guests to understand how woven together and interconnected everything is. How we’re all part of nature.”

It’s a beautiful sunny day when we make a stop at Gandll K’in Gwaay.yaay (Hotspring Island). The pools dried up for a time after a 7.8 magnitude earthquake hit the islands in 2012—but the water has gradually returned. The trail to the clifftop pool winds through grass, salal and delicate new shrubs and I’m soaking in the warm soothing waters before it occurs to me this is one of the islands where the controversial deer cull occurred.

By removing deer from this and the other islands it’s hoped that culturally sacred and medicinal plants, including Ts’uu redcedar, K’ay crab apple and Ts’iihlinjaaw devil’s club would begin to thrive again. Wildlife such as northern goshawk, ancient murrelets and sawwhet owls could also benefit from more greenery and ground cover—and maybe even those songbirds would keep returning.

Heated to steaming, I leave Evan to relax in the hot water and plunge into the cold ocean, feeling more alive than I have in months. The sea shimmers between me and the green hills of Moresby Island and I think about all the healing this land is experiencing. With the return of kuu sea otter the kelp forests are expected to bounce back, giving habitat to rockfish, juvenile herring, salmon and abalone. Managing the deer populations will allow the Haida people to access the traditional medicines that can grow here. Eradicating the invasive black and brown rats is protecting the rare sea birds that call the islands home.

It is more than this though—by stewarding the land using traditional knowledge, the Haida people are rebuilding their culture and reclaiming their customs, preserving it for their children. And when visitors opt to learn about, and respect, traditional Haida culture, we open ourselves up to a connection with the Haida people and can experience the land more fully. Returning to Cascadia—I feel heavy-limbed and serene. Seated at one of the long dinner tables, I dig into dinner and listen to Shea and Gladstone answer questions and summarize the day. At one point, a passenger named Carol mentions she’d always wanted to visit Haida Gwaii, but as someone who came from Toronto, she hadn’t expected to feel quite so linked to the landscape.

That’s when everything Shea and Gladstone have been saying becomes clear to me: Knowing a place more fully allows us to love it more deeply. And when we love a place deeply it becomes part of us. And then—if that place grows out of balance, (when it’s ill, I guess you could say) we do all we can to restore the balance, fix things that aren’t working and make it well. Because we’re all interconnected, and everything depends on everything else.