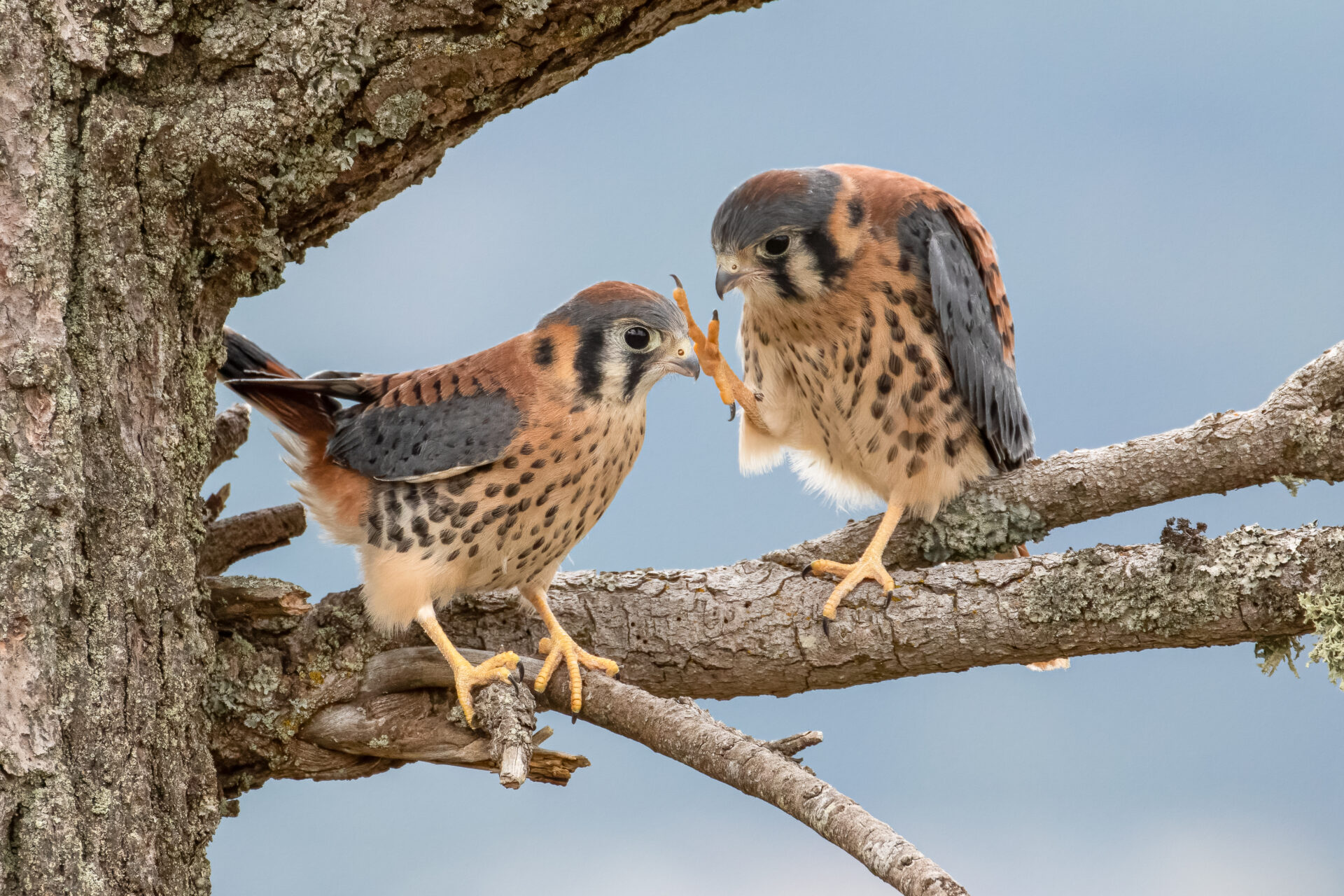 Spend the season exploring the BC Bird Trail

By Summer Konechny and Erin Jackson

Fall isn’t the only thing in the air. This season, head for the trees, wander BC’s shorelines and riverbanks and look to the skies to marvel at the thousands of birds travelling the expansive Pacific Flyway between the Arctic and South America.

Not sure where to start? The BC Bird Trail highlights some of the best birdwatching spots across British Columbia, with information on what species to look out for each season as well as places to eat, stay, shop and play along its self-guided trails.

Keep reading for some of the best spots to see our feathered friends near you!

New this year, you can find the Columbia Valley Bird Trail between the Canadian Rockies and the Purcell Mountains, spanning the vast wetlands bordering the Upper Columbia River. Here, on the traditional land of the Ktunaxa, Okanagan and Shuswap peoples, the towns of Golden, Cranbrook, Radium, Invermere and Kimberley offer boundless opportunities for birding.

With the arrival of fall, listen for the sounds of songbirds and warblers echoing through the valley as they prepare for their long trip south for the winter. Expect to see various raptors and waterfowl, the regal trumpeter swan and maybe even the pink belly of a lewis’s woodpecker while the last bit of warmth hangs in the air.

The quaint town of Cranbrook—a little mountain town in southeastern BC surrounded by bountiful lakes, marshland, rivers and forests—anchors the Columbia Valley Bird Trail in the south. At the western edge of town, 5.9-hectare Elizabeth Lake Bird Sanctuary hosts a number of animal species—from western painted turtles to both migratory and resident birds.

The Cranbrook Community Forest, northeast of town, has more than 100 kilometres of trails with ample opportunities for bird sightings. At the northeast corner of the Community Forest, follow the Eagle Hill Lookout along an old rail bed to catch views of Mount Fisher, the Steeples Mountains and the great Canadian Rockies along with a number of bird species.

Just north, off of Highway 95A (Kimberley Highway), enjoy more birdwatching along the easy two-kilometre hike at Wycliffe Buttes on foot, bike, horseback or even snowshoes.

Just north of Cranbrook, Kimberley is home to the biggest cuckoo clock in Canada and some of the best birding in the province.

Keep watch as you traverse the 28-kilometre North Star Rails 2 Trails, a paved, multi-use trail connecting Cranbrook and Kimberley. Immerse yourself in the Canadian wilderness at Kimberley Nature Park, BC’s largest municipal park, which shelters nearly 100 species of birds, some year-round. Lace up your boots and enjoy the scenic hiking or single- and double-track mountain biking trails of the Lois Creek Trail System. Or, for a little stroll with big views, head to Marysville Falls, where a short boardwalk path leads to a 30-metre waterfall.

As you meander north along the Columbia River, stop in Canal Flats to wander the two-kilometre Source of the Columbia River Trail and scenic Tilley Memorial Park, before exploring the neighbouring towns of Invermere and Radium Hot Springs. Here you’ll see a variety of birds common to the Pacific Flyway, plus those that are found in the Rockies and farther east into the Prairies.

Farther north on the Columbia Valley Bird Trail, you’ll find Golden. Only an hour from Banff, Alberta, this is the heart of the parks—a bustling mecca of outdoor recreation enveloped by stunning mountain ranges.

At Confluence Park, aptly named for its location where two historic rivers meet (the Columbia and the Kicking Horse), you’ll find a short trail with views of the wetlands and forested riverbanks. For a view of the Columbia Mountains, head to Reflection Lake just south of town and follow the trails and information boards to discover the diverse wildlife and waterfowl that call this refuge home. Before you go, spread your wings (or stay firmly grounded and take in the views) at the Mount 7 Paragliding and Hang Gliding site.

Find out what birds to look out for along the way here.

Just a 15-kilometre hop, skip and jump from metro Vancouver lies the South Fraser Bird Trail and some of the best birding in North America.

Across the mighty Fraser River in Delta, wander the beautiful beaches of Tsawwassen, enjoy the farm-town charm and waterfront views in Ladner and tour the unique parks of North Delta.

Along with the more comfortable temperatures compared to this past summer in BC, the cool season brings thousands of lesser snow geese to Delta’s Westham Island. As a part of the Pacific Flyway nesting population, tens of thousands of lesser snow geese stop near the George C. Reifel Migratory Bird Sanctuary as they make their migration to BC in the fall all the way from Wrangel Island, Russia. Landing in the Fraser River area in mid-October, the population then moves once again to spend most of the winter near the Skagit River in Washington around late December. When the weather warms again, these stunning white birds make their way back to the Fraser River to prepare for their flight back to Russia.

The snow geese create quite a spectacle as they stay together in tight, dense flocks that are constantly moving while people are near, acting like a blizzard of white feathers across the George C. Reifel Sanctuary’s grounds. Don’t let their name sway your opinion of these beautiful birds—there is nothing lesser about their magnificent black tipped wings, pink beaks and glossy white plumes of feathers. Family units can often be spotted within the flock by keeping an eye out for the smaller, grey feathered babies that have not yet gained their white markings.

Any visitors paying close attention to the flock can help international migratory research efforts by reporting any birds spotted with marked collars that they may spot in the crowd.

NEW: Surrey is the newest addition to the South Fraser Bird Trail, stretching from the shorelines of Boundary Bay at the US-Canada Peace Arch border in the south up to the Fraser River.

Explore North Surrey’s sandy waterfront at Brownsville Bar Beach and 10-kilometres of trails through Green Timbers Urban Forest, or the rich birding habitats visible from Surrey Lake Park’s two-kilometre loop in the Guildford/Fleetwood area. Southeast, experience some of the regions best birding at Hi Knoll Park or Mud Bay Park’s shoreline trail. Don’t forget South Surrey, where a multitude of parks create boundless opportunities for birding whether beachside at Blackie Spit Park, alongside the tide pools of neighbouring Crescent Beach or from the viewing towers of Serpentine Fen.

Find out what birds can be found this fall along the South Fraser Bird Trail here.

Join the flocks and migrate to the edge of the mighty Fraser River this fall to experience the incredible birdwatching opportunities in Langley, Abbotsford, Chilliwack and the Harrison River Valley—four abundant communities on the Fraser Valley Bird Trail.

Duck into the trees to hear the tap-tap-tap of woodpeckers. Follow your ears and see if you can spot the red-capped pileated woodpecker’s large black body perched on a dead tree or fallen log in search of carpenter ants, or the scalloped plumage of the northern flicker as it flits along the ground digging for ants and beetles.

To really test your skills, see if you can tell the difference between the black-and-white downy woodpecker and the hairy woodpecker, its slightly larger doppelgänger. Kinglets can also be found singing their songs in the trees alongside charming little chickadees.

Find more information about the Fraser Valley Bird Trail and the 200 different bird species that frequent the region here.

This stretch of Van Isle features a number of birding hot spots as well as cosy cafés, farm-fresh restaurants, local shopping, homey accommodations and world-class views—everything you need to make this birding getaway or backyard daytrip a breeze.

From Cowichan and Nanaimo north to Parksville Qualicum Beach, explore the traditional lands of the Coast Salish people and the ever-changing avian life along the way. In the fall, Central Vancouver Island’s herring run brings short-billed and Iceland gulls, among others, to enjoy the feast. Farther offshore, auks including the marbled murrelet and common murre peruse the waters. If you’re lucky, you might even see the long-tailed duck between its surface dives to impressive depths for small fish and invertebrates.

Learn more about the Central Vancouver Island Bird Trail and the birds who call this region home here.

So, what are you waiting for? Wherever you are, the BC Bird Trail makes birding easy. All you have to do is look up!