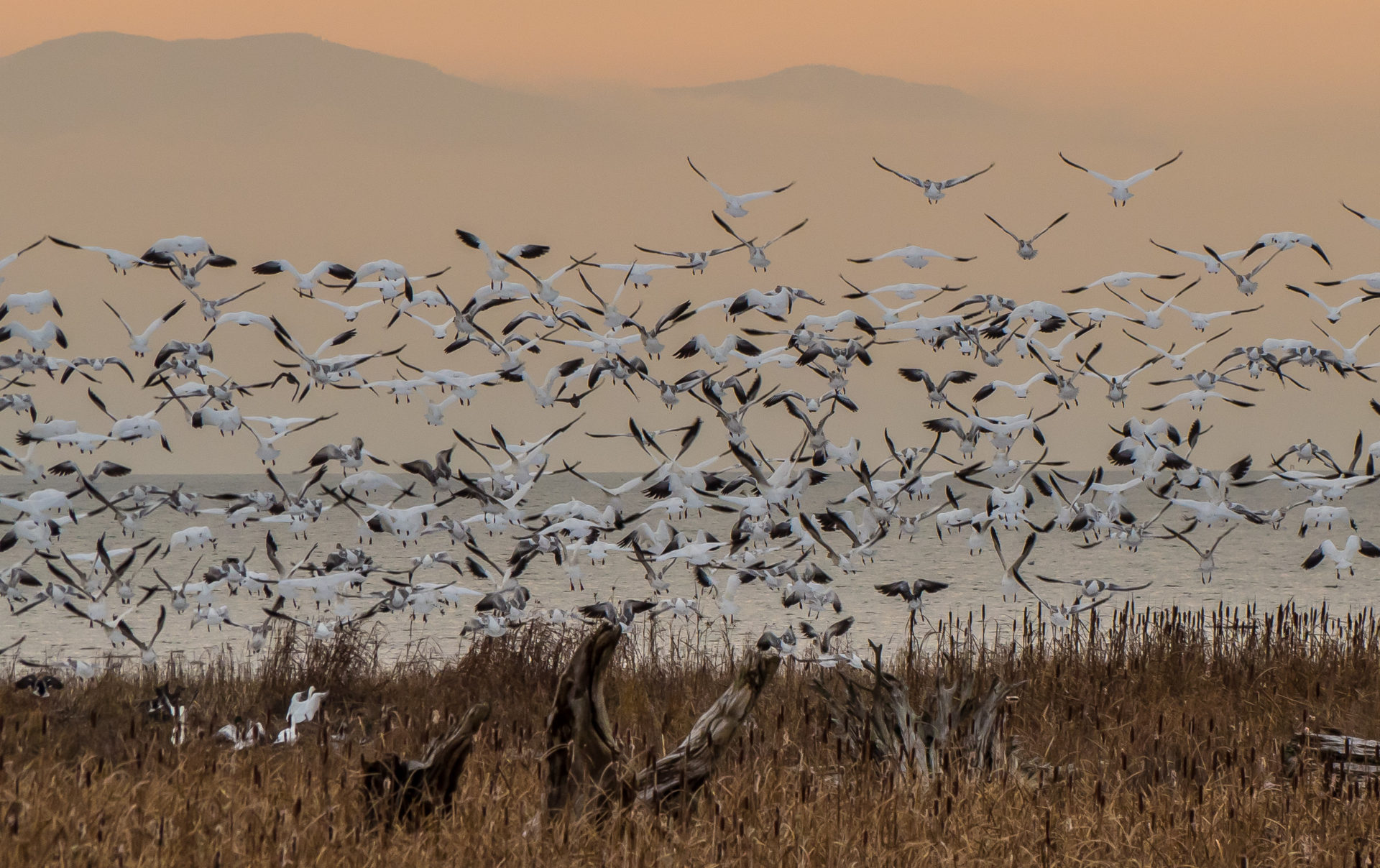 Snow geese taking flight at the edge of the tidal marsh on Richmond’s West Dyke trail. Diane Selkirk photo.
Outdoor AdventureStaycationsThings to Do

Exploring the BC Bird Trail

There's so much to see when you start looking

Standing on Richmond’s West Dyke trail at the edge of the tidal marsh—I start to zoom in my camera on a group of snow geese. Just as the bright white feathers come into focus, the entire flock lifts off as one. The loud, thrilling scene fills the horizon and gives me the boost of wonder that comes when the spectacle of nature overwhelms your senses and reminds you that the world truly is wild.

A few weeks later, I returned to the dyke, but the snow geese had departed. The spectacular migration, which sees some five million geese travel south along the Pacific Flyway from the Bering Strait of Alaska to California, includes a local stop that attracts thousands of birdwatchers.

With the geese gone, I assumed there wouldn’t be much avian life left to see on the pretty trail that winds through Terra Nova Park and out to the dyke. But then my BC Bird Trail Guide, Liron Gertsman started pointing birds out. “One of my favourite things is introducing people to urban birdwatching and seeing how surprised they are by the diversity,” Gertsman told me.

In many ways, the BC Bird Trail couldn’t have launched at a better time. With the pandemic, birdwatching has emerged as a safe, social-distance activity that you can do in your own community. It’s ever-changing, available year round, easy to take up and it’s a pleasant way to get some exercise. Recent studies have also pointed out that time spent focusing on wildlife can even relieve stress and ease depression.

As someone who enjoys birds in a general sense, I was curious about what the BC Bird Trail might have to offer a novice birder like me. I know how to identify a few obvious birds (herons & bald eagles come to mind) but for the most part I loosely divide birds into ducks (and duck-like birds), shore birds, eagle/hawks and song birds. The idea of identifying specific birds seemed a bit fussy and memory intensive (at a time when my memory is already overtaxed). It turns out I couldn’t have been more wrong.

The easiest way to go birdwatching might be to keep a lookout for birds on your next walk. You can step up the effort by grabbing a bird book or using a birding app like the Merlin birding app. But the Bird Trail can help you take it a step further by identifying the best locations in the Fraser Valley, on Central Vancouver Island and in the Richmond Delta area to see the widest variety of birds.

In the city of Richmond, six birding areas have been highlighted by the Bird Trail and a birding map is available that identifies which birds are mostly likely to be found in each location.

It turns out that having the map (and Gertsman as a guide) changed my experience; I was no longer just labelling everything as a duck or songbird. I learned that by really looking at the birds and asking questions I gained an understanding as to what attracted the black-capped chickadee to a specific bush (the berries) and why the non-descript looking pied-billed grebe needs a long running-flapping start to take off from water (their wings are really small and their feet are weirdly big—so they can swim well).

Taking time to really notice bird behavior and paying attention to the characteristics a skilled birder looks for helped me realize that birding is about more than checking off a species sighting from a list. It’s about taking time to observe and appreciate differences—the more involved you get, the more richly you see.

Suddenly you realize not every duck is a mallard and that hidden among them might be an American wigeon or a green-winged teal, which are living quite different lives.

I felt remarkably relaxed and peaceful as we walked along the dyke in the waning sunlight. Hoping to see a few final snow geese I looked seaward where I caught sight of a hawk and watched it hunt. Spotting and watching individual birds was fun—and the antics of the song birds did make me laugh, but I confessed to Gertsman that I was missing the thrill of watching the snow geese in action. There’s something remarkable about being made small by nature.

“Have you been to the crow roost?” He asked. One of the marvelous things about urban bird life is how much happens around us, but if we forget to be curious, we miss it. He explained that every winter night at dusk, crows from across the lower mainland converge to roost just off Boundary Rd in Burnaby near the Costco. Estimates say between 10,000-30,000 birds roost in the light industrial area.

So while it’s not part of the Bird Trail that’s where I headed the next evening at dusk. First one crow arrived, then five, and then ten. Then suddenly a river of crows was flowing toward us. The air filled with crow calls and flapping wings and every surface became occupied by a crow.

It was invigorating and awe-inspiring and just another ordinary evening in the city.