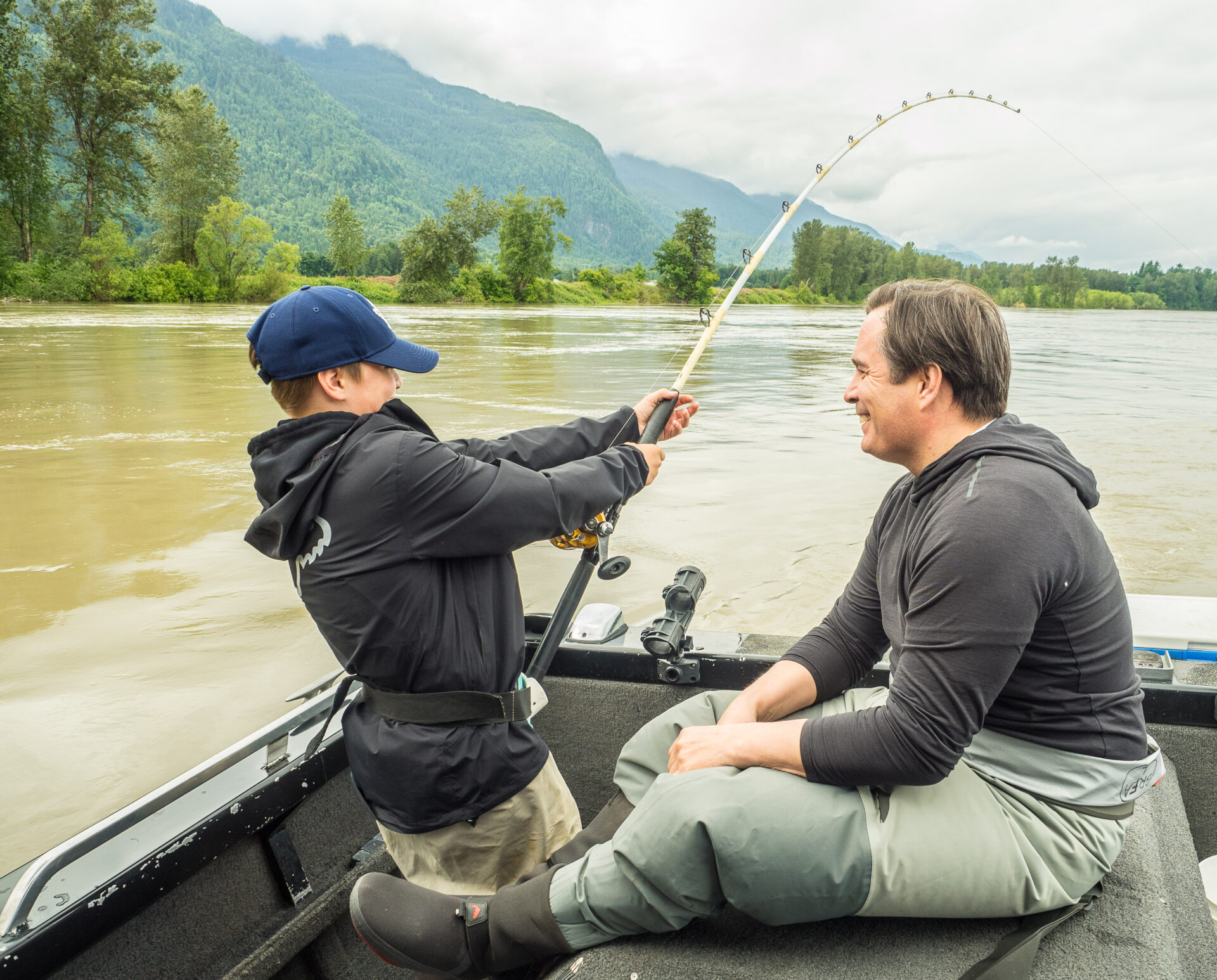 Culture & HistoryDestinationsNatureOutdoor AdventureThings to Do

Cruising up the fast-moving Fraser River from Chilliwack, past farmland, small islands and steep forested slopes, we pass a few places that Rick Stahl, our guide from Indigenous-owned Great River Fishing Adventures, says are good for fishing. The 80-kilometre stretch between Mission and Hope is known as “the heart of the Fraser.” It’s one of the most productive river channels in the world, and Rick has fished almost every metre of it.

But with the water running fast and high with the freshet, he has a different spot in mind. And after a few more bends, he drops the anchor and casts the lines. Rick is just about to explain the process of fishing for the famed Fraser River white sturgeon when the bobbing of one of the rods lets us know the fish had beaten him to it. 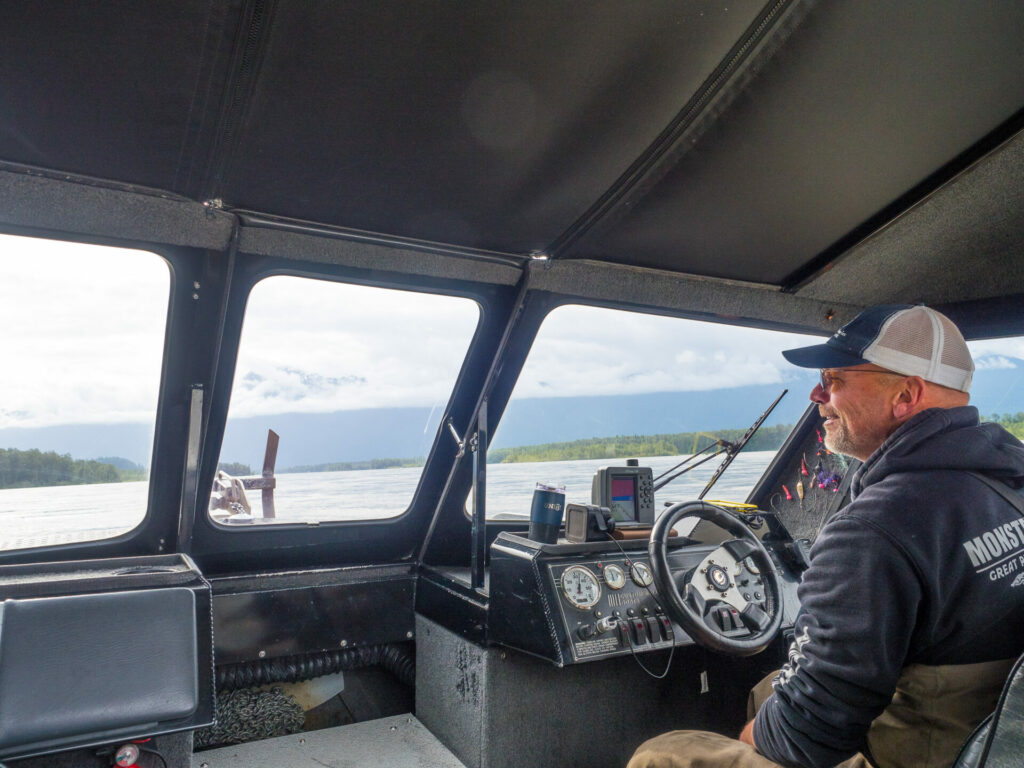 As the line unspooled, Rick passed the rod to one of my more seasoned boat-mates, Sebastien. Then Rick reeled in the other three rods (one for each adult with a licence), raised the anchor and started driving downriver. The fish was swimming away with such force; it was all Sebastien could do to hold on.

With the boat on the move, the pressure on the line eased. So Sebastien handed me the rod and showed me how to pull the sturgeon closer to the boat by dipping the rod toward the fish and then reeling in. It took about ten minutes of dipping and reeling before my arms started to burn. Five minutes more, after finding the rhythm (and losing strength), I passed off the rod to Keith and started asking questions about the monster fish we found ourselves attached to.

The sturgeon is a prehistoric fish that hasn’t changed much in the 200 million or so years it’s been hanging out on the planet. With a sinuous muscular body and sharp amour plates called scutes, it’s a bottom feeder that siphons up crustaceans and small fish through a tube-like, toothless mouth.

It continues to grow for its entire 120-plus-year lifespan, which means, the bigger the fish, the older it is. As the rod passed from hand to hand, I realized the powerful fish at the end of the line had been around for some of the region’s most significant changes, leading up to its own near extinction.

Before European contact, the sturgeon was an important fish for the local Stó:lō people. Its meat could be smoked, the scutes were used as needles and spears, the isinglass (from the swim bladder) made waterproof glue, and the oil even repelled mosquitos.

The challenge, of course, was catching the creature; it’s the largest freshwater fish in North America and can weigh as much as 600 kilograms—and, as I discovered—it’s powerful.

In 1864, Sir Arthur Birch, the Colonial Secretary living in New Westminster, wrote a letter to his brother detailing how the Indigenous fishermen would probe the river bottom with long spears as they drifted down the Fraser. When they found a sturgeon they would harpoon it in unison, “The barb of the spear immediately disconnects from the pole but remains attached to a rope and you see sometimes two or three canoes being carried off at the same time down river at any pace by these huge fish.”

By the late 1800s, settlers had joined the hunt for the ancient fish. While the Fraser seemed to have an endless supply, female sturgeon don’t reach maturity until they’re between 25 to 30 years old and only spawn every three to six years. The Fraser white sturgeon simply couldn’t reproduce quickly enough to keep up with the demand of a commercial industry that saw a peak harvest of half a million kilograms in 1897. By the close of the fishery in 1994, catches were as little as 5,000 kilograms per year.

As incongruous as it might seem, Rick explained how the catch-and-release sport fishery was actually contributing to the protection of the species. As the first of our three fish tired, and we moved closer to shore for measuring and a photo, he said the fish are tagged and tracked; a process that has produced a collection of data that’s beginning to unlock the mysteries of the sturgeon.

The big concern is that despite stopping the fisheries (the First Nations also voluntarily halted their food fishery) sturgeon numbers haven’t consistently increased and are currently on the decline. Since 2005, the numbers of juvenile sturgeon (age seven to 12 years) has dropped substantially.

This is why catching and tagging the fish has been so important—it gives biologists information about where the fish are and how they’re doing. Recaptured fish can be especially vital–they help biologists gauge how much stress the sport fishery places on them and gives information about how quickly they grow. 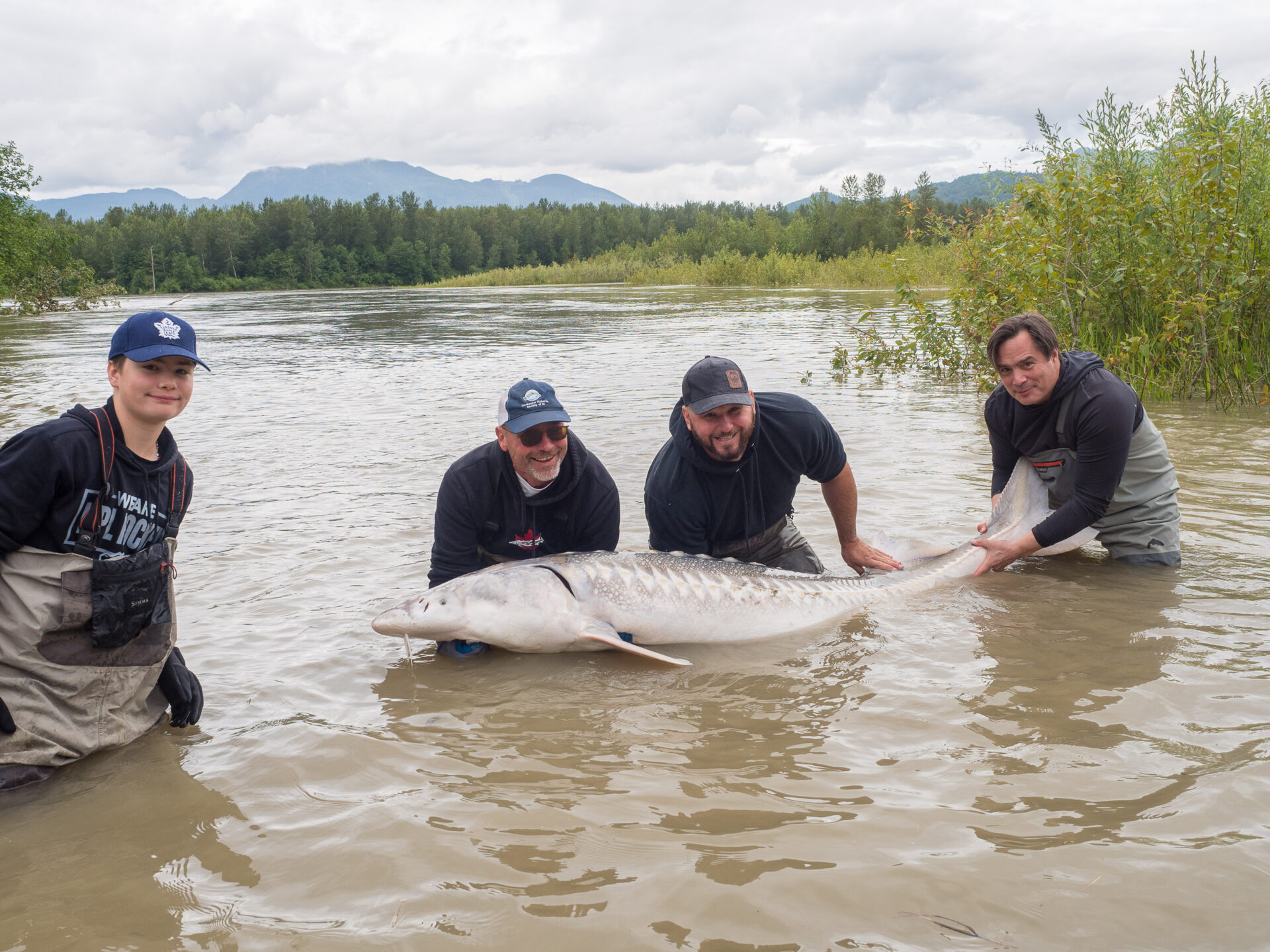 Through this research, biologists have begun to identify some of the biggest issues affecting the survival of the sturgeon: habitat erosion, high water temperatures and low oxygenation levels, watershed destruction as well as damage to the spawning areas have recently been identified as key factors.

In response, Rick explained the spawning channels are now closed to sport fishing during the newly identified spawning season (May to July). Other efforts focus on the overall health of the river’s unique and fragile ecosystem—but conservation is being outpaced by development.

Our eight-hour day on the water sped by, and suddenly it was time for the final cast. The last fish was the smallest. We didn’t need to pull up the anchor and our boat wasn’t dragged down the river like the canoes of old. After we reeled the fish in, Rick bumped the boat up to the shore and I hopped in the murky water.

Standing waist deep I looked our fish in her small, milky-blue eye. Running my gloved hand over her gray armored skin, I realized this celebratory moment was less about my prowess at fishing and more about the fish’s fierce will to survive. The Fraser River sturgeon is one of the last remaining populations of white sturgeon in the world (the only others are the Sacramento and Columbia) and it’s the only population that’s still considered wild (not hatchery raised) and can swim freely out to the ocean.

The fish stayed still for barely a moment—not quite long enough to measure or take a good photo. Then, with a quick swish of her powerful tail, the sturgeon was gone. Back into the depths of a river we’re in a race against time to understand.