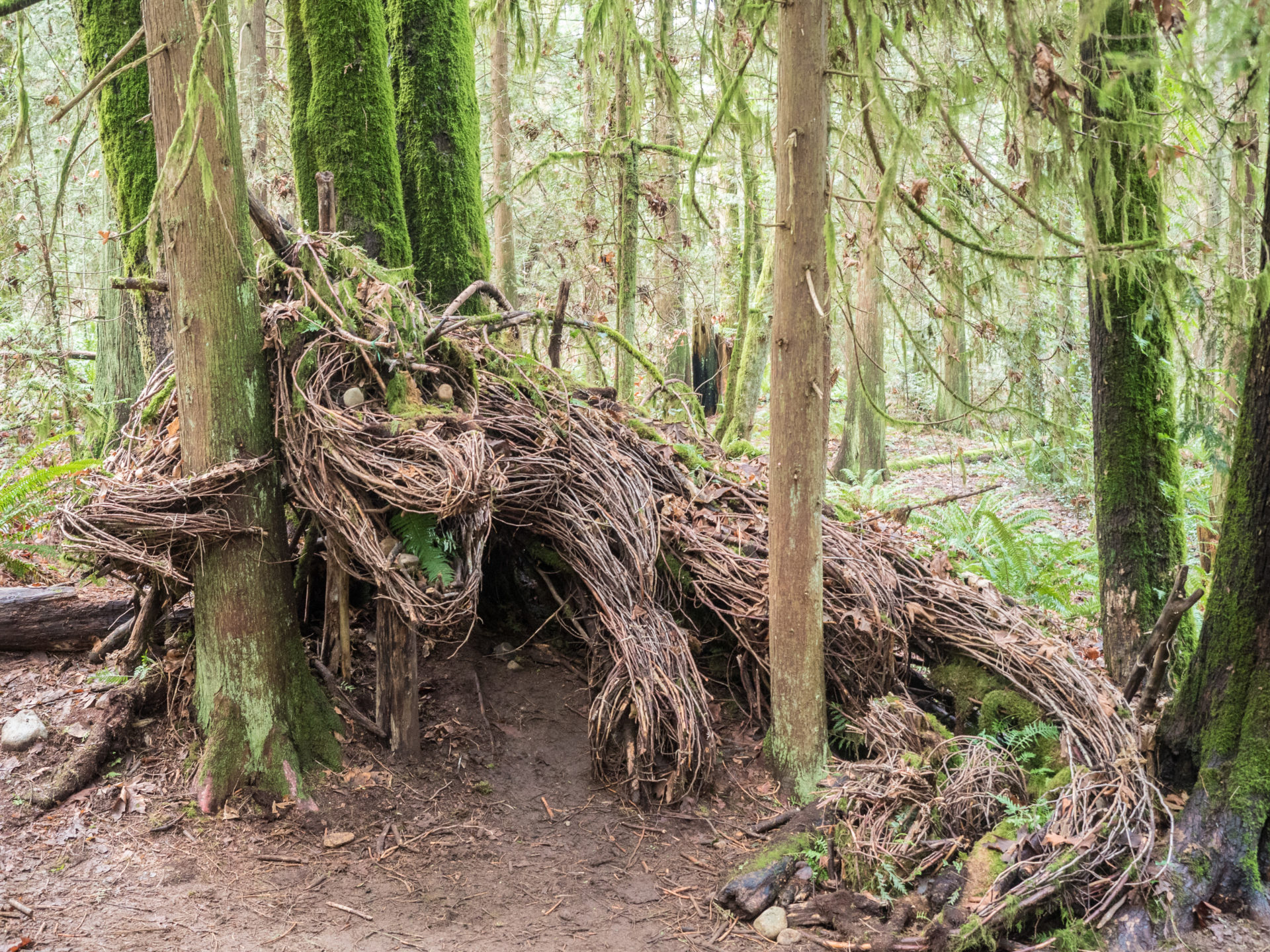 When the art gallery is found in a wooded grove

I’m pretty sure we lost the trail fairly early on. Following the waypoint on the GPS, my daughter Maia and I leapt over a creek and then made our way through some underbrush, all the while searching for the wooden sculpture of Echo, the non-binary unicorn.

“Here they are!” Maia called. And there, grazing by a small creek was Echo, in all their woodsy finery.

Created by artist Nickie Lewis, Echo was the first of the dozen, or so, fanciful sculptures that she built in Robert Burnaby Park. Created out of twigs, twine and other natural materials, the large and small sculptures are scattered throughout the woods of the 48-hectare public park in East Burnaby. So natural in appearance, the creatures look like they grew in place. Some blend in so perfectly that we almost bumped into the dragon.

On her Instagram feed, Lewis says she was inspired to create the forest sculptures after COVID-19 shut down the events she regularly exhibited her artwork at. Luckily for fans of her playful landscape art, Lewis also provides a google map to help you locate the sculptures—because it turns out the nearly 100 year old suburban park is filled with trails that crisscross a surprisingly large, forested creek ravine.

Landscape art often tends to occur fairly organically. Oftentimes it’s a collective effort based on something that catches people’s imaginations like Vancouver Island’s Shoe Tree, which began in 1989 when Holberg resident Tracey Anonson tossed a pair of shoes up into an old cedar snag. The famous tree now bears hundreds of shoes left by passing travellers.

Some of these collective efforts are discouraged: Teapot Hill near Chilliwack is a good example—the teapot collection on the trail has at times grown out of control; creating litter and threatening to the rare species of orchid that grow here.

Other community efforts are officially sanctioned. Train Wreck hike in Whistler was so popular that the once off-limits site is now connected to the Sea To Sky Trail with a suspension bridge that crosses the Cheakamus River. The trail brings visitors to the colourfully painted box cars, which have sat in the forest since 1956 and frequently get refurbished by passing graffiti artists. Much the way an art gallery changes its displays.

I first became transfixed by this kind of outdoor gallery when visiting the Wacky Woods near my mum’s home on Vancouver Island. Though the artist George Sawchuk has since passed on and his whimsical gallery has been reclaimed by the forest, it made me realize that art could occur anywhere and turned just about every hike into a scavenger hunt.

Since then, I’ve set off to explore these quirky galleries as often as possible. There’s something about the combination of free, scavenger hunt, rogue art and the out of doors that I find irresistible. 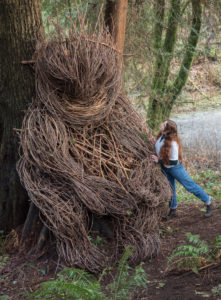 Spirit Trail Walk, Harrison Hot Springs: A local artist created clay masks for the trees in this enchanted feeling woods where it seems “the trees had individual personalities.” The one-kilometre trail is flat and easy.

Hide and Seek, Kaslo: Hikers in Kaslo can join a game of hide and seek searching for eight sculptures (seven kids and one adult) found hiding along the 3.2-kilometre Kaslo River Trail. Created by the Koots Artist Collective the sculptures are a new addition to the trail.

Fairy Forest, Redwood Park Surrey: Five kilometres of trails wind through meadows and several forested groves containing over 50 species of trees that were planted by two early Surrey pioneers. Keep an eye out for the extensive fairy village and its shy inhabitants.

You will be sent an opt-in email to confirm that you would like to receive emails from us. By signing up for our newsletter, you agree to our Privacy Policy and Terms of Service.

This website uses cookies to improve your experience while you navigate through the website. Out of these, the cookies that are categorized as necessary are stored on your browser as they are essential for the working of basic functionalities of the website. We also use third-party cookies that help us analyze and understand how you use this website. These cookies will be stored in your browser only with your consent. You also have the option to opt-out of these cookies. But opting out of some of these cookies may affect your browsing experience.
Necessary Always Enabled

Any cookies that may not be particularly necessary for the website to function and is used specifically to collect user personal data via analytics, ads, other embedded contents are termed as non-necessary cookies. It is mandatory to procure user consent prior to running these cookies on your website.