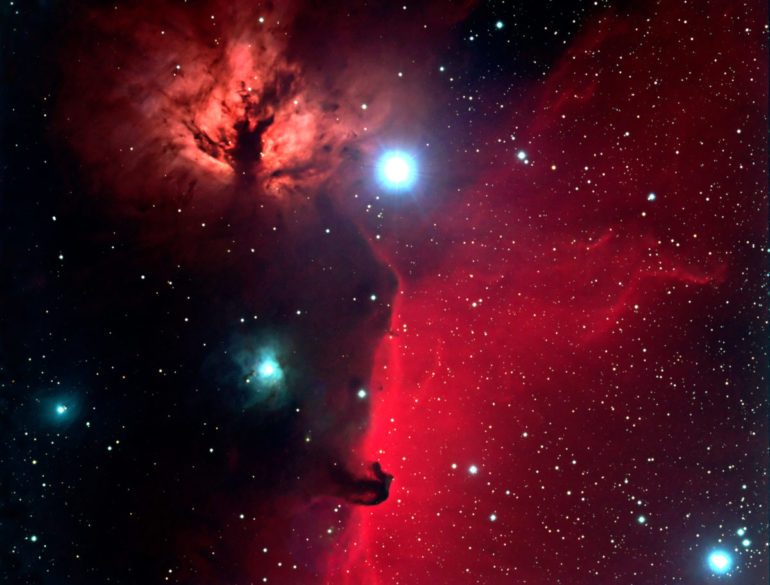 Jack Newton, owner of Observatory B&B, has been photographing the stars for more than 60 years. Photo by Jack Newton.

To get a glimpse of the unimaginably vast universe and its almost-infinite number of stars, solar systems and galaxies, I head for Osoyoos and its dark skies. Winding up the side of Anarchist Mountain, my eyes are drawn by a distinctive white dome. This is the Observatory Bed and Breakfast built in 2000 by Jack Newton and his wife Alice. A powerful telescope is mounted inside the six-metre-diameter dome which rests on an 11-metre (35-foot) concrete pillar anchored in bedrock to minimize vibrations. Jack chose this locale because it has what is arguably the best night sky for astronomy in Canada.

Soon, I meet the legend himself. As we chat, I discover Newton is an expert in astrophotography (a fancy name for taking photos of the stars) with a worldwide reputation. Stunning colour photos of galaxies and nebulae taken by Newton line the living-room walls. He has written six books, received numerous awards and is often asked to speak at conferences. Proudly, he shows me a dazzling full-page photo of the sun in the 70th anniversary issue of Life magazine. To top it off, the International Astronomical Society named asteroid 30840 Jackalice in honour of him and his wife.

Truly astonishing is that Newton, who was born and raised in Winnipeg but spent most of his life in British Columbia, has had no formal training in astronomy. He developed his expertise while working at regular jobs, for example, as store manager for Marks & Spencer in Victoria.

Slowly the sun sinks behind the jagged, purple mountains, and finally the darkness I have so anxiously been awaiting arrives. Newton leads his guests up to the dome. The centre of attention is a 20-inch Meade RCX400 telescope, a hulking tube that, with its attached cables, smaller telescopes and camera, looks like a kid’s giant Transformer.

With the room illuminated by faint red light, Newton enters data into a computer and the telescope whirs and moves as though alive to the star Newton has selected.

Gazing through the eyepiece, we see single and double stars, the Ring Nebula, the Pleiades, the Milky Way and the moons of Jupiter. Newton’s enthusiasm fills the darkness. “Space is immense,” he says, “it’s 13.7 billion light years across, and is continually expanding.” We casually observe stars and galaxies that are as distant as thousands of light years—units so large they elude my comprehension. I am overwhelmed, fascinated and humbled.

The stars we view are fuzzy white circles, and don’t relate to the spectacular colour photos we have seen downstairs. Newton explains that the human eye scans in a thirtieth of a second and is only sensitive to black and white. His photos are exposed for a minute or more and computer circuits bring out the colour.

The evening is exhilarating, carried by Newton’s passion and knowledge. “Scientists estimate there are [trillions of] stars in the universe,” he tells us, “and it is now recognized that most stars have accompanying planets. Thus, the chance of life out there is very high.” He adds with a chuckle, “I hope they’re vegetarians.”

Newton has programmed the telescope to automatically search and photograph the skies for supernovae. To date, he’s discovered or co-discovered more than 200, an impressive record and useful, since supernovae are used by astronomers to measure distances.

Newton, now 77, was drawn Ito astronomy at an early age. “I bought my first telescope when I was 11,” he says. “When the other kids wouldn’t believe that I could see the rings of Saturn, I bought a camera with my paper-route money and built a mechanism so it could take photos through the telescope. It worked.”

Jack is the first Canadian amateur to be awarded time on the Hubble Space Telescope. He was part of an elite team who photographed and studied supernova (SN)2010O, which he discovered.

To close the show, Newton points one of the smaller telescopes at the bright full moon. The dome is filled with hushed oohs as we peer at a stark landscape of mountains, valleys and craters that seem close enough to touch.

Six more observatories have been built on Anarchist Mountain since Jack opened his. A long-time member of the International Dark Sky Association, he tirelessly works to preserve night skies. For example, he encouraged Osoyoos to make its skies darker by installing streetlights that shine only downward.

Then Newton describes the Arizona Sky Village, southeast of Tucson, the world’s first community designed for amateur astronomers. “We spend winters there and I have a similar setup to what you see here,” Newton says. The site is considered the best in the US for star viewing because of its dryness, high-altitude and lack of light pollution. “Since my telescopes are computer-driven, I can operate them from anywhere,” he notes. He links into his Arizona observatory by internet and flicks on the lights in a dome more than 2,000 kilometres away. I’m astonished watching him move the Arizona telescope and show us pictures of stars through it, some of which are not visible from our northerly position.

Descending from the dome, we stop at Newton’s theatre where a three-metre, high-definition screen fills one wall. “When it’s too cloudy to see with the telescopes, I give guests a slide show and Astronomy 101 talk in here,” he says, “including live pictures from my Arizona telescope.”

Then I am in the Moon Room (there are also the Eclipse and Saturn suites), which is awash with suns, moons and celestial decor. The lights of Osoyoos twinkle below. Soon I am dreaming of galaxies far away.

The next morning, our astronomy lesson continues apace as we sip coffee, munch on strawberry cobbler and yogurt and savour views of the valley. Newton explains how in pre-digital days, film produced better photos if it was chilled. So, he constructed a camera cooled by dry ice and was the first in the world to take celestial photographs using this technology, which operates at about -40°C.

In 1991, Newton became the first to make colour digital images of the stars. He took three separate black and white photos using CCD (charge-coupled device) sensors, each with a separate filter in red, blue and green, which were then combined. The first photograph, M27 the Dumbbell Nebula, appeared on the cover of Astronomy Magazine.

After breakfast, we climb again to the observatory. Newton shows us the sun through special filters. We see solar flares, prominences and sunspots as Newton explains magnetic storms and how our sun is evolving to become a red giant.

After the other guests depart, Newton leads me to his workshop. The small room is crammed with lathes, drill presses, metal machining tools and pieces of cameras. Newton has a prodigious talent for building innovative devices, and I’m standing right where it all comes together.

Leaving, I wind down the hillside, my mind whirling. I have caught a humbling glimpse of the smallness of humans in an immense universe. And I have also had the honour of meeting an enormous human spirit.

To book a room (the Observatory B&B is open May 1 to October 31), or explore Jack’s astrophotography and career visit jacknewton.com.